Most people are familiar with the term “road rage” and have an idea of what it means. They would likely associate it with someone swearing and/or yelling at other drivers from their vehicle, honking unnecessarily, or generally driving unsafely out of agitation. This behaviour is actually more in line “aggressive driving”. You might be thinking that those sound interchangeable, but there is an important distinction between them.

The Alberta government defines road rage as the driver of a vehicle that attempts to intimidate, injure, damage, or even kill a pedestrian, driver, or passenger. Road rage is aggressive driving with the intent of causing damage to someone or something. 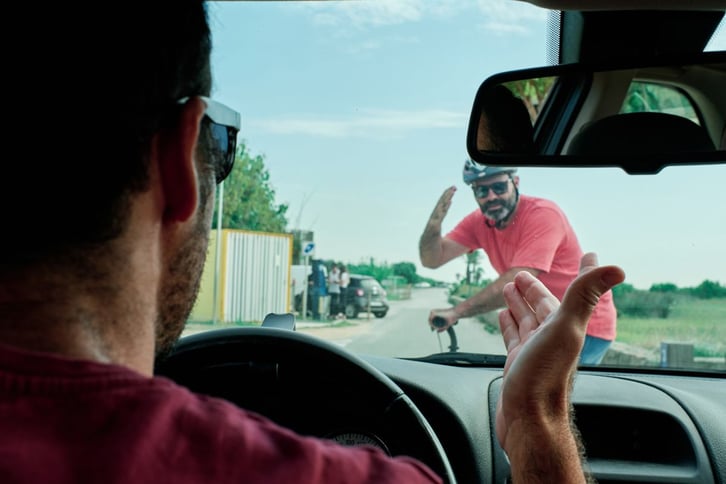 The question then becomes, what is aggressive driving? Aggressive driving is a range of risky behaviours that are done intentionally and are not due to road conditions or driver error.

What is considered to be aggressive driving? 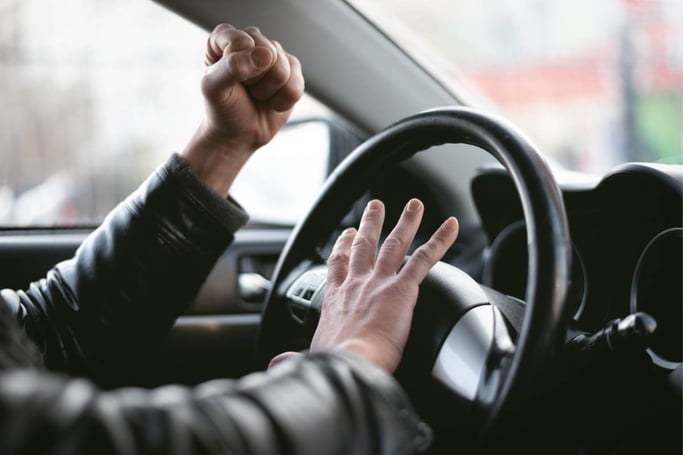 What are the penalties for aggressive Driving?

Not only can you face fines for aggressive driving, you could also see a price increase in your insurance. Using the average auto insurance annual premium of $2,400/year, we will calculate the cost increase from the consequences of aggressive driving.

If you are tailgating another vehicle in Alberta, you can be given a ticket for following too closely with a fine of $172 and 4 demerit points on your license. This offense could result in a 15%-40% increase in your insurance premiums.

If you run a red light in Alberta you can be the owner of a brand new $488 ticket and 3 demerit points against your license. This offense could result in a 15%-40% increase in your insurance premiums.

Street racing could land you a stunting ticket. Stunting has a broad definition of performing or engaging in any stunt or other activity on a roadway that is likely to distract, startle, or interfere with other users of the roadway. A stunting violation is incredibly dangerous and the penalty corresponds with that. The penalty is a ticket that could range from $567-$2,700, 3 demerit points, and potentially a court appearance. This offense could result in a 100%-400% increase in your insurance premiums.

The category of "careless driving" is more broad. It is usually defined as operating a motor vehicle without due care and attention, or without reasonable consideration for other motorists or people on the road. This can include excessive speeding, weaving in and out of traffic, cutting off other drivers, and many other erratic risk taking behaviors. While this violation is considered to be more subjective, it comes with a hefty penalty of a $473-$2,700 fine, 6 demerit points. This offense could result in a 100%-400% increase in your insurance premiums.

Excessive speeding is a little bit different. Depending on the speed you are clocked at over the speed limit, your fine and demerit points also change.

How do I avoid aggressive driving?

Being in a rush to get somewhere and getting caught up in poor road conditions, heavy traffic, or construction, can be incredibly frustrating. Frustrated drivers are more likely to engage in aggressive or higher risk taking behaviour. By planning your route in advance, you can determine the amount of time you will need to arrive at your destination, possible construction sites, and account for the appropriate volume. If you're not running late to wherever you need to be, you will be able remain calm and avoid some of the stresses that come with driving. Remember, it is better to arrive late in a safe manner than it is to not arrive at all.

Many drivers, especially experienced drivers, can default to what is called passive driving. You may have experienced this before where upon arriving at your destination, you hardly remember the drive you took to get where you are. This is called passive driving and while there may have been no issues on your commute, passive driving can make you less alert and prepared to deal with adverse conditions or other drivers. By actively driving, you can stay vigilant and prepared to make decisions on changing factors on the road.

Other drivers are sited as being one of the most frustrating parts of driving. Understanding that mistakes will happen is a large part of remaining calm on the road. You cannot control the behaviour of the drivers on the road, but you can control how you react to them. Instead of retaliating to an aggressive driver, let it go. Retaliation of insults, excessive honking, tailgating, etc., could turn an aggressive driver into a road rage driver.

Aggressive driving and road rage can result in a serious offense against a driver. With proper planning, active driving, and road courtesy, you can help to reduce own aggressive driving behaviour. Remaining calm but alert is a key element to safe driving in Alberta and it is paramount that you continue to behave this way even when conditions aren't favorable. Acting as an aggressive driver could cost you thousands! Act responsibly and don't be afraid to take your time.

Would you consider yourself a non aggressive driver? Maybe you could save some money on insurance with Intact insurance UBI (usage based insurance). Find out more here.

How to get tree sap off of your car

How is inflation impacting insurance?