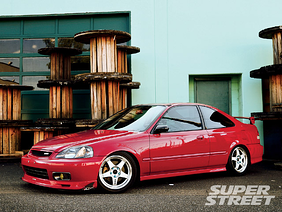 The Insurance Board of Canada (IBC) has released it's annual list of the Most Stolen Vehicles for Canada in 2012.

Honda's 2000 Civic SI is hitting the number one spot this year. This car is popular among younger drivers and because of the current high demand for parts on this vehicle, it's easier to strip down and resell than some of the other choices out there for theifs.

And Canada's top 10 most frequently stolen vehicles in 2012 are:

The IBC offers these tips for consumers to help prevent your car from making it onto the 2013 list:
Here's 2011's list for those that would like to compare!