Is it Ever Legal to Do a U-Turn in Alberta? 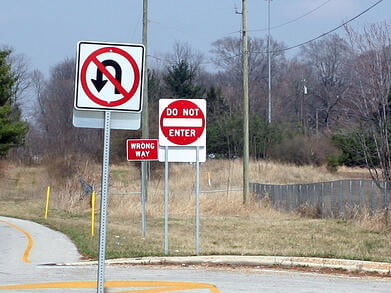 On a sunny Saturday morning last May I was pulled over and issued a ticket for an illegal U-Turn. After I got past the initial embarrassment of being pulled over on a busy road, I asked the police officer, where it actually WAS legal to make a U-turn in Alberta. His response surprised me...

"It is practically never legal to make a U-Turn in Alberta."

In my situation, I had entered a left turn lane for what I thought was the street I needed to turn on, but as I inched up I realized that I had entered a long line of cars going into an extremely busy Costco parking lot. This was not the turn I was looking for.

"No problem", I thought, I'll just pull a U-Turn and come back around to the correct intersection. After all, there was no sign prohibiting U-Turn's at this intersection.

The light turned green and I waited until there was no oncoming traffic, and made the turn. Immediately I was pulled over by an under cover police car for making an illegal U-Turn. After the conversation I had with the Edmonton Police officer that pulled me over, I had a whole different understanding about U-Turns in Alberta.

When Is It Legal?

So the police officer that pulled me over may have been exaggerating just a little bit, but he wasn't far from the mark. It is sometimes OK to make a U-Turn, but finding a spot there you can do it legally can prove difficult. Here's what Alberta Transportation has to say about it:

Do not do a U-turn unless you can do it safely.

U-turns are not permitted:

In urban areas U-turns are not permitted:

Outside urban areas (rural) U-turns are not permitted:

These, somewhat confusing, rules surrounding U-Turns, actually do leave you with very few options. Even if you do find a spot where it is legal to make the turn you could be given a ticket if it is deemed that you interfered with traffic in any way during your U-Turn.

I paid my fine and learned my lesson. Only a year and a half until those demerit points come off my license!

Armour Insurance partners with the most Insurance providers in Alberta, try our 3 minute quick quote and see if you're paying too much!

Awesome to Deal With!

Every time I have called, everything is handled in a very professional and timely manner!! Awesome company to deal with. Thank you!   5/5
-Lori K.

Looking for a quote on your home or auto insurance? Whether you live in Edmonton or anywhere else in Alberta, you can contact one of our brokers to help you

Our 2020 Intact Client Centre Winter Contest Winner! How Your Insurance Company is Responding to the COVID-19 Pandemic Basement Flood Prevention Checklist We're Here to Serve You